In DSE 6.0 we bring an exciting new optimization to Apache Spark’s Catalyst engine. Previously when doing a Join against a Cassandra Table catalyst would be forced in all cases to perform a full table scan. In some cases this can be extremely inefficient when compared to doing point lookups against a Cassandra table. In the RDD API we added a function joinWithCassandraTable which allows doing this optimized join but prior to DSE 6.0 there was no ability to use this in Catalyst. Now in 6.0 a joinWithCassandraTable is performed automatically in SparkSQL and DataFrames.

How to use DSE Direct Join

and would like to pull out a small set of keys defined in a CSV. To do this we would use the DataFrame API and perform the following code.

In OSS Spark this would cause a full table scan and shuffle inorder to perform the Join, but in DSE 6.0 we avoid both the Full Table Scan and the Shuffle (or BroadcastJoin).

As a user we didn’t have to tell Spark anything about Cassandra or this join, and it automatically made the correct decision.

The following is from a RF=3 10 node cluster, 16 cores and 60GB of ram. The total Data set is 10B rows in 20 Million Cassandra Partitions. 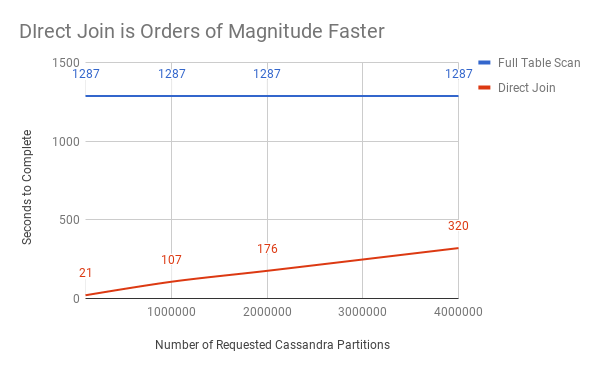 In this chart we can see that unlike the Full Table Scan, the direct join can efficiently retrieve small amounts of Cassandra Data. This does not even take into account the amount of time additionally required to shuffle the data and actually perform the join in the non-direct join scenario.

When the DSE Direct Join Is automatically applied

If these conditions are not met the query plan is left to Spark to optimize.

The Ratio is defined as 0.9 by default but can be changed by setting the “directJoinSizeRatio” option in the Spark Session config.

Direct joins can be set to always be used (regardless of size ratio) by setting directJoinSetting to “on”. Setting the parameter to “off” will disable using the optimization even if the ratio is favorable. The default “auto” checks the ratio before either applying or skipping the optimization.

Programatically the decisions can be made on a per table basis using the directJoin function. This function can be applied to any DataFrame plan with an underlying CassandraSource relation and will mark the relation as to whether it can or cannot be a direct join target.

To see exactly what Spark did let’s call explain on the join.

In our first plan we see the entire branch of the plan relating to reading Cassandra has been removed and replaced with a single non-branching plan. This shuffle-less plan will instead take each partition of the CSV data and use it to do DSE Java Driver based lookups directly against the DSE. This takes advantage of the natural speed that Cassandra has at point lookups based on partition keys. Avoiding the scan also means we do not have to serialize the entire table to get just these select partitions.

Some thoughts on Distributed Things